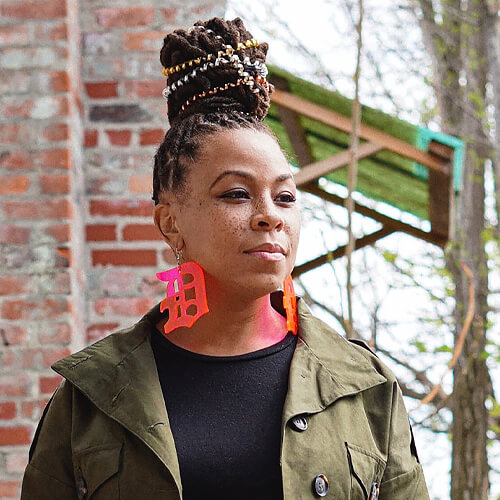 Detroit-bred and -based fine artist, muralist and 2017 Kresge Fellow Sydney G. James earned her BFA at the College for Creative Studies in 2001 and began her career as an Art Director in advertising. Sydney headed to Los Angeles in 2004 to expand her career as a visual artist in the film and television industry and earned her master’s degree in secondary education.

Returning to Detroit in 2011, Sydney has become one of the newest leading creative voices in southeast Michigan. Exploring themes of the racial and gender positioning of the black woman in America as “last” or “least among others” in society has been the central theme in Sydney’s work recently. Her portraits and murals seek to reposition this narrative of the black woman’s visibility and importance, bringing them to the forefront of the conversation. Influenced by the artists Barkley L. Hendricks, Hubert Massey, Jenny Saville and the Afri-COBRA collective,  Sydney’s art expands figurative painting with bold brushwork, colors and imagery.

Sydney has displayed her art at MoCAD, Charles H. Wright Museum, M Contemporary Art, PLAYGROUND DETROIT, The Collective Detroit, Detroit Artists Market, Red Bull House of Art, and Janice Charach Gallery as well as the Art Beats + Lyrics traveling exhibit. She has completed public murals in Detroit, New Orleans, Atlanta, and Los Angeles; and Accra, Ghana; Freetown, Sierra Leone; and Kathmandu, Nepal. She has painted in a multitude of mural festivals such as Murals in the Market (recognized by National Geographic as one of the world’s best mural festivals), Pow Wow Hawaii, Pow Wow Long Beach, Pow Wow Worcester, and Denver CRUSH WALLS. Some of her most recent work has been as a branding agent partnering with Ford Motor Company, PepsiCo, the Detroit Lions, Lip Bar Cosmetics and Vans. Sydney takes on each new project with the gusto and intention of one approaching a new adventure: excited, prepared and ready to engage.